On 9/26/15, Indian Prime Minister Modi was welcomed in San Jose by a diverse crowd of invited 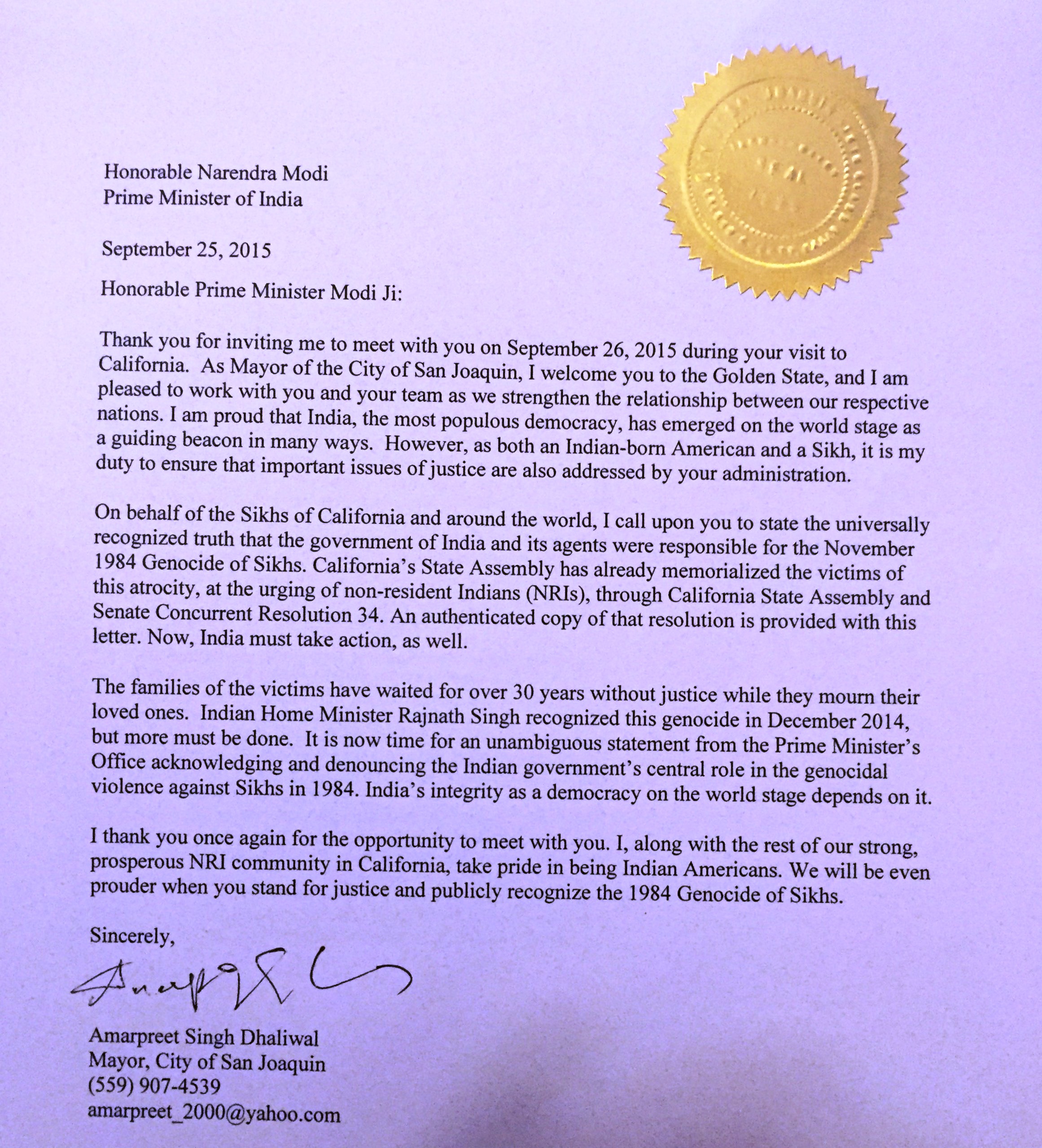 South Asian guests representing all of the cultures, states and religions of India. While many of the dignitaries seemed content to enjoy the gala and take selfies, Mayor Amarpreet Singh Dhaliwal of the City of San Joaquin, used this opportunity to take a principled stand on behalf of Sikhs worldwide.

Mayor Dhaliwal attended the event and delivered to Indian Deputy Consulate General K.J. Sirinivasa a letter addressed to PM Modi, calling upon the PM “to state the universally recognized truth that the government of India and its agents were responsible for the November 1984 Genocide of Sikhs.” The letter includes a copy of California Assembly Concurrent Resolution 34 (ACR 34, authored by American Sikh PAC) that memorialized the victims of the genocide.  Mayor Dhaliwal stated in the letter that “It is now time for an unambiguous statement from the Prime Minister’s Office acknowledging and denouncing the Indian government’s central role in the genocidal violence against Sikhs in 1984. India’s integrity as a democracy on the world stage depends on it.” The full letter is available at this link.

American Sikh PAC congratulates Mayor Dhaliwal for taking a stand on this issue. His advocacy, combined with the strong statement made worldwide by ACR 34, continues the campaign to keep pressure on PM Modi and his administration regarding the 1984 Genocide of Sikhs. Other Sikh leaders have joined in appreciation of Mayor Dhaliwal’s actions.

Harmeet Kaur Dhillon, vice-chair of the Republican Party of California, praised Mayor Dhaliwal’s actions in seeking justice for the Sikh Genocide, “Government after government ruling India since 1984 has failed to bring the guilty to justice, and failed to take steps to heal the wounds that continue to scar the Sikh psyche worldwide. As Indian Americans celebrate Prime Minister Modi’s visit to California and all that it symbolizes for much-needed change in India, those who forget the past are condemned to repeat it. Thanks to courageous action from community leaders like Mayor Dhaliwal, the Sikh community will keep this issue in the forefront until it is satisfactorily resolved, and justice is obtained.”

Darshan Singh Mundy, American Sikh PAC Board Member, was instrumental in working with the California Assembly to pass ACR 34. “It is the duty of all Sikhs to speak out against injustice. The Indian government has a history of crimes against minorities, whether they are Christian, Muslim, Dalit or Sikh. We will not forget the 1984 genocide and we must ensure that such crimes do not happen again.” 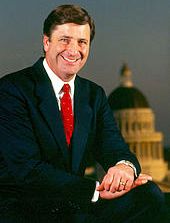 Although many state and federal elected officials met with PM Modi during his most recent trip to the United States, only Congressman John Garamendi (CA 3, Fairfield-Davis-Yuba City) advocated on behalf of those communities that are being persecuted in India. Two weeks prior to his meeting with PM Modi, Congressman Garamendi met with American Sikh PAC representatives to discuss the long history of human rights violations perpetrated by the government of India.

The congressman has a close relationship with the Sikh community and all South Asians, including a large population within his district. After the meeting with PM Modi, Congressman Garamendi posted the following via social media:

“Today I had the opportunity to meet with Indian Prime Minister Narendra Modi during his visit to the Silicon Valley. As a member of Congress and as the Co-Chair of the American Sikh Congressional Caucus, I represent a large Indian American population, including many Sikhs. Many of my constituents are deeply concerned about the treatment of religious and ethnic minorities in India. I am grateful that my position in Congress afforded me the opportunity to bring up these concerns to the leader of the world’s largest democracy.Religious freedom and access to justice are rights we cherish here in America. But these are not just American values. We believe that everyone in the world deserves the same access to these fundamental rights. All of India’s religious and ethnic minorities, including its substantial Sikh population, deserve to practice their religion and customs without government interference as long as human rights and individual conscience are respected. I appreciate that Prime Minister Modi gave me the opportunity to discuss these critical issues. Rest assured that he knows where I stand and that the message of my constituents was heard loud and clear.”  (via facebook)

Assemblymember Jim Cooper (AD 9, Lodi-Elk Grove-South Sacramento) recently promoted Mikey Hothi to the position of District Director. Mikey has been working for Assemblymember Cooper since he took office in November 2014. Prior to that, he was employed with Senator Richard Pan. “Mikey has been a key member of my team since I was elected to the Assembly last year. He has been doing a fantastic job serving our constituents and I’m glad to have him take over as District Director.”  explained Assemblymember Cooper.

Mikey is also the president of the Young Democrats of Sacramento, a role that is well-respected by local politicians because of the strong record of activism by the organization. Regarding his new position, Mikey said, “I’m honored to be working as District Director for Assemblymember Jim Cooper and thankful to have the support of so many in the Sikh community. This opportunity would not have been possible without them.”  As District Director, Mikey is leading Assemblymember Cooper’s district office and outreach efforts to approximately 470,000 constituents in the 9th Assembly District.

Both Assemblymember Cooper and Mikey worked closely with American Sikh PAC in passing ACR 34, the resolution passed by the California Senate and Assembly stating that the government of India was responsible for the November 1984 Genocide of Sikhs. In his remarks to the Assembly, Cooper stated “Although we cannot change the horror of the events of 1984, as an assemblymember representing families of genocide victims, I felt it was important that we tell the truth about those events and honor the thousands of victims.  Sikhs around the world should know that, here in California, we will always stand against intolerance and will not forget the tragedy of 1984.” 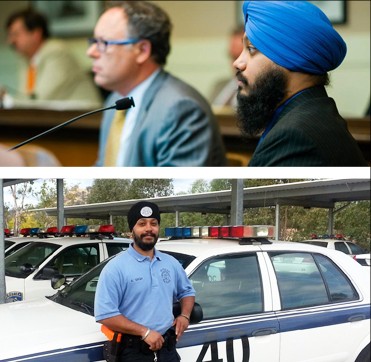 employers from discriminating against their employees for wearing religiously-mandated clothing or hairstyles.  The legislation was spurred by American Sikh PAC and could not have been passed without the amazing telephone and letter campaign of the California sangat.  Since its passage, a number of turban-wearing Sikhs have been hired by law enforcement agencies.  Most recently, Amandeep Singh was hired by the Yuba County Sheriff.  He had been

applying for positions for over a decade and had even testified in the California Assembly in an effort to change the law. “It brought my morale down, to get rejected over and over again, but I knew it was going to be a long, hard fight,” Singh said. “When I got the phone call saying that I had passed the test and got hired, I was speechless,” Singh said. “I was finally able to start pursuing my dream and the career that I’ve always wanted.”At the bill’s signing ceremony, Governor Brown spoke about the bill, “Sikh Americans are loyal citizens who have been targeted because of widespread ignorance of their religion and culture. The bills I sign today aim to ensure that Californians learn about our Sikh citizens as well as protect all of us from job discrimination based on religious observances,” he said.

The author of the bill, Assemblymember Mariko Yamada has a long history of friendship with American Sikh PAC and the Sikh community of California, “This bill is dedicated to all those who have suffered the indignities of ignorance and discrimination in the workplace because of the tenets of their faith. No longer will it be legal to segregate a worker from public view because their appearance did not fit a corporate image.”